In order for a technology to take off these days, it has to be simple. Twitter, Facebook, iTunes, Spotify â€” each can be summed up in a sentence or so and readily understood from the very first time you use it.

Tomahawkis more complicated, but if youâ€™re a music fan who listens to music on a laptop or desktop â€” and has friends who do, too â€” it warrants a try, and possibly a place in your quiver of favorite music apps.

First if not foremost, Tomahawk is a media player along the lines of iTunes or Winamp, which can play the music stored on your computer. The fun starts when you install Tomahawkâ€™s content resolvers, which are basically plug-ins that can find music to play in a bunch of other different streaming services, using their search APIs (application programming interfaces) â€” Spotify, Official.fm, YouTube, Bandcamp, Grooveshark and others.

Whenever you try to play a song, Tomahawk might use any combination of these sources to provide the audio. For playing your own locally stored music, thatâ€™s a fairly useless feature. You already have the song, so why would you want to play it in Spotify instead? However, Tomahawk gets more useful when youâ€™re trying to play stuff you donâ€™t already have â€” for example, a playlist from a Tomahawk-using friend.

By downloading and installing these “content resolvers,” you can connect the Tomahawk music player to a wide variety of sources.

â€œWhen I want to play a song, or somebody sends me a song, theyâ€™re not sending me a song â€” theyâ€™re sending me the metadata about that song â€” artist, track, possibly the album,â€ explained Tomahawk open source contributor Jason Herskowitz. â€œThen, on my side, Tomahawk says, â€˜OK, out of all the content sources that you have access to, whatâ€™s the best match?â€™â€

Within the same playlist, Tomahawk might grab one track from your local machine, another from your friendâ€™s machine, a third from YouTube and a fourth from Spotify. After all, you donâ€™t care where that music lives; you just want to hear it.

Note that Tomahawk can play tracks from your Tomahawk friendsâ€™ computers, which makes Tomahawk a P2P streaming client with which you can listen to your friendsâ€™ collections, tap into your work computerâ€™s music from your home computer, and so on.

Tomahawk is much easier to use now than it was back when we wrote our lengthy tutorial on how to use it, but it still requires a small degree of technical sophistication. The main hurdle: installing the content resolvers, which are the plug-ins that let Tomahawk hook in to YouTube, Spotify and the rest.

Itâ€™s easy enough. You can either go to the Tomahawk page and choose the resolvers you want from the list, pictured to the right â€” or (this is easier) just go to Tomahawk > Preferences > Resolvers and install them from there. (In the case of Grooveshark, Spotify and any other unlimited music subscriptions, youâ€™ll need to be a premium subscriber in order for it to work.)

â€œLocal networkâ€ lets you play songs from other computers on your own home network, the same way you can in iTunes. â€œExtended networkâ€ lets you tap into your friendsâ€™ collections on their computers, so that if you donâ€™t have a song on a given playlist, it plays from their machine. (They need to be running Tomahawk at the time.)

The latest version of Tomahawk (0.3.3) includes the ability to listen along in real time with your friends and make radio stations that resolve to any sources to which you have access. (The latter uses technology from The Echo Nest, publisher of Evolver.fm.) It also includes nice extras like the ability to choose only high-quality music from YouTube.

Now for the $64 million question.

â€œThe problems that you need to solve today are, youâ€™ve got silos of music everywhere. Iâ€™ve got my library of music in Exfm, which I love, Iâ€™ve got stuff on Spotify, Iâ€™ve got stuff everywhere else, and Iâ€™m forced as the user to bounce between interface to interface to interface, and thereâ€™s no way on earth that I can listen to a playlist that goes from the Beatles to my cousinâ€™s band to my favorite stuff at home to some live recording that I found. This basically solves that problem. Itâ€™s a very user-centric view.â€

Indeed. Still, Tomahawk doesnâ€™t have it all. For sending music to Apple AirPlay speakers, for instance, youâ€™ll need to use AirFoil software (at least until OS X adds native AirPlay support later this year).

As for Android and iPhone versions, Herskowitz said, â€œnot yet.â€ 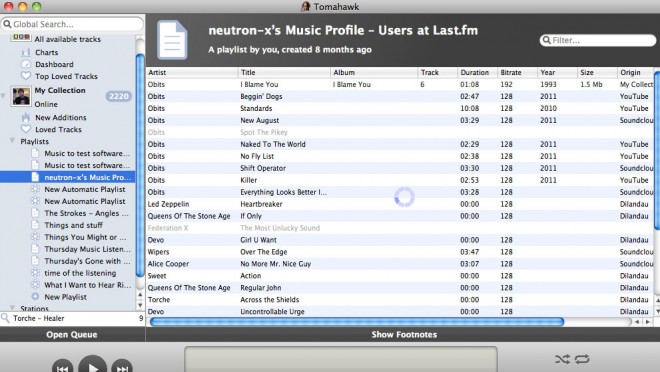