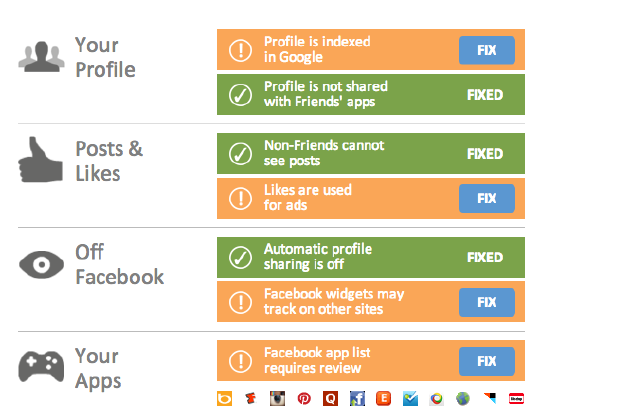 Savvy Internet users know that all the great stuff they get from the Internet for “free”â€”the searches, the social networks, the games, even the newsâ€”isn’t really free. It’s an exchange, where companies are able to take user data, sell it to advertisers, and make money that allows them to give themselves a paycheck while keeping you afloat in free digital services.

So that data you’re giving away online is worth something, but have you ever taken a stab at figuring out how much? A just-released privacy add-on for Firefox and Chrome, Privacyfix, gives it the old college try. Both Congress and the executive branch have been talking more about online privacy in the past couple years.

The estimates for Google and Facebook are imprecise, as the program’s creator, Privacy Choice founder Jim Brock, readily admits. “We wanted people to understand, it is a value exchange” when they use these sites, said Brock.

Privacyfix measures your last 60 days of activity on Google, extrapolates that to a year, and uses a value-per-search estimate. Analysts believed Google was making $14.70 per 1,000 searches in 2010, and possibly less in 2011. Of course, if you spend all your time searching for luxury hotels or mesothelioma lawyersâ€”and then clicking through the advertised linksâ€”you’re much more valuable than the average user.

Brock says his estimated annual Facebook value was a mere $1.68. His daughter, perhaps unsurprisingly, is at $12. His Google value checks in at more than $700 per year, though.

The add-on also tells you how many of the websites you visit feed data back to Facebook and Google. I was surprised to see that Facebook is tracking me across 87 percent of the Internet, despite the fact that I’m a minimal user of Facebook.

Privacyfix has a checklist for Facebook privacy settings, with orange warning signs near settings that users might want to take a look at. Unless you’re a complete privacy hawk alreadyâ€”or you don’t care at allâ€”you’ll probably find something new on that list that you weren’t aware of. Did you know Facebook automatically shares your profile info when you visit certain sites? Did you know your profile details are sometimes shared not just with your friends, but often with the makers of your friends’ apps?

Privacyfix also gives you a heads-up on things you should be doing anyhow, like deleting Facebook apps you no longer use so that they stop gathering data. The add-on links you directly to those Facebook settings so you can fix them immediately, navigating you through a maze of privacy options some find arcane; it has a similar function for Google. “I haven’t had anyone go through this process who was not surprised by something [they saw],” said Brock.

While it isn’t Brock’s intention that all users should tightly clamp down their privacy controls, that’s what most of the users of Privacyfix have chosen to do so far, he said. Future plans include similar privacy controls for Twitter and LinkedIn, as well as a mobile app.