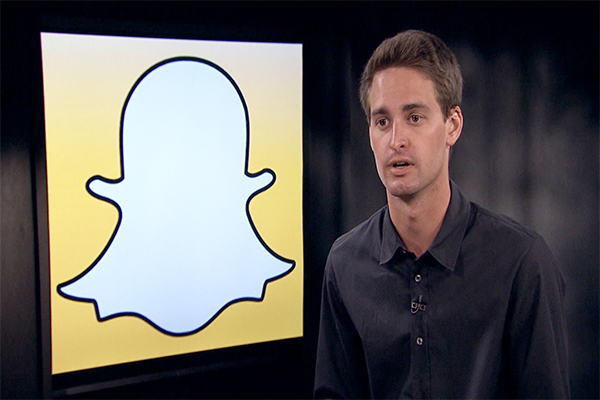 One way to sum up Snapchat CEO Evan Spiegelâ€™s attitude: â€˜What, me worry?â€™

Following their dismal Q1 2017 report in May, investors fled the company, causing it toÂ loseÂ $6 billion overnight. Â Snapchat simply hasnâ€™t built a plan to defend itself against social networking behemoth, Facebook. Â And Spielgel & Co still donâ€™t have a plan to attract users away from Instagram Stories, an outright clone its own Snapchat Stories.

Criticizing Spiegelâ€™s inability to innovate, Morgan Stanley analysts knocked its stock target price to $16. Â It downgraded the stock just four months after its debut. Â The stock opened at $24.48 a share on March 2nd, reaching an all-time high of $27.09 a day later.

â€œWe have been wrong about SNAPâ€™s ability to innovate and improve its ad product this year.â€

Scott Galloway, a marketing professor at NYUâ€™s Stern School of Business, outright lambasted Snapchatâ€™s poor leadership. Aimed at investors, he issued a strong warning to avoid the stock at all costs.

â€œInvesting in Snapchat is like driving drunk; itâ€™s something that no responsible person should do.â€

In anÂ interviewÂ with CNBC, Galloway didnâ€™t mince words when speaking about Evan Spiegel. Â â€œYou are handing your money over to a 27-year-old with no rights to the stock,â€ he blasted.

Snapchat previously had a $20 billion valuation. Â On its first day of trading, it earned a market capitalization worth over $30 billion. Â Financial services and investment outlet The Motley Fool issued their own adjusted valuation. Â In a piece titled â€˜Snap is a dead stock walking,â€™ Timothy Green wrote,

â€œIf you instead assign it the same price-to-sales ratio as Twitter, another perennially unprofitable social media company with a stagnating user base, Snap would be worth just $2.3 billion.â€

The company faces a serious problem. Though it has over $3 billion in cash, Snapchat continues to invest money in expensive acquisitions. It also throws away more cash than it earns in revenue each quarter.

But thatâ€™s just the beginning.Â  On July 29th, the stockâ€™s lock-up periodÂ ends. Â With stocks currently way below the IPO price, worried investors may trigger a massive sell-off.

Is Evan Spiegel worried? Apparently not. Â While Snapchat continues its sharp decline in the stock market, its CEO is currently on vacation. Â Nervous investorsÂ recently spokeÂ to the New York Post. They are furious that Spiegel has yet to cut short a three-week vacation with his â€œbro buddies.â€

Spiegel, alongside his wife Miranda Kerr and friends, are blissfully sailing on a 70-meter yacht.

At Snapchatâ€™s stock peak, Evan Spiegel reportedly had a net worth of $6 billion. Â With stocks reaching a new low, the 27-year-old CEO has lost $2.4 billion.

Spiegel reportedly has no intention to return home. Â The New York Post described the CEOâ€™s luxurious ride off the coasts of Italy.