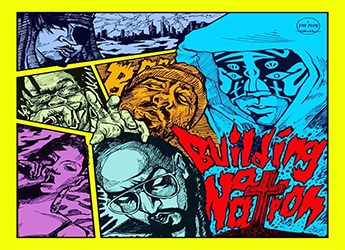 NY-Tokyo based label, The Plug International, presents the release of their latest EP by Omen 44 titled â€œBuilding a Nationâ€.

The label is known worldwide for its promotion, events, videos, and promotion.Â  Some of Hip Hopâ€™s greatest have worked with the label such as Statik Selektah, Smif-N-Wessun, Marley Marl, 9thÂ Wonder, and countless others.

Omen 44 originally from Kobe, evolved into a seasoned and respected Hip Hop artist since claiming NY as home and placing his stake in the music scene. Â The quick buzz and notoriety from his music resulted in shared global stages and collaborations with the likes of such heavyweights as Sadat X, Craig G, Large Professor, and more.Â  44 offers fans a lengthy catalog of albums, mixtapes, and EPâ€™s all of which incorporate a mixture of sounds and beats from Jazz to Funk over his lyrical imagery.

His latest EP â€œBuilding a Nationâ€ features Brooklynâ€™s very own Bankai Family, Ida Divine, and Sav Skillz.Â  44 is pure genius for this impeccably created masterpiece! â€œSamurai Codeâ€ one of the singles off the EP sets a tone for a Hip Hop meets Bruce Lee face-off.Â  While â€œCanâ€™t Take Man Fi Toyâ€ is on another level with a smooth reggae tone background over boom bap lyrics.Â  Like his other projects 44 gives listeners an exceptional balance of lyrics, polished sounds of drums and pianoâ€™s, over classic Hip HopÂ beats.

Stream â€œBuilding a Nationâ€ below.