After the most controversial Presidential election in this countryâ€™s history, one that has not only created further divisiveness amongst the people residing in it, but one that now includes handful of cities across our nation protesting in the streets Â it has become evident we are living in a complicated and dangerous time. The societal divide widens so deeply with every passing day that it seems as if at any moment the pendulum could shift.Â  KXNG Crookedâ€™s Good Vs Evil could not appear at a more needed time.

Crooked doesnâ€™t give a warning shot with Good Vs Evil, he directly tackles the boiler-plate issues that are permeating society as a super-hero persona from an alternate reality; racial and economic injustices, unprovoked police brutality (and the glaring lack of accountability), a deteriorating educational system, governmental agencies that willingly pump poison into its communities, systematic racism and a basic disregard for civil rights.

Good Vs Evil is an incendiary and unapologetic audible call to arms that demands to not only be heard—but processed.Â  The anger, truth, authenticity and clarity of Crookedâ€™s mythological characterâ€™s message are both palpable and unwavering. The albums messaging is an embodiment of Public Enemy, Ice Cube, N.W.A. and Tupac updated and delivered as only KXNG Crooked can.

â€œFour years from now we’ll see if I was channeling my inner Nostradamus when creating this albumâ€ Crooked exclaimed to Mass Appeal. â€œI say that because the arch nemesis in the storyline is a character called the “Puppet Master” who I modeled after Trump; but with more power. Now that Trump has more power than ever I wonder if my album’s warnings will become prophecy.â€

No Justice, No Peace! You have been forewarned—KXNG Crooked Good Vs Evil! 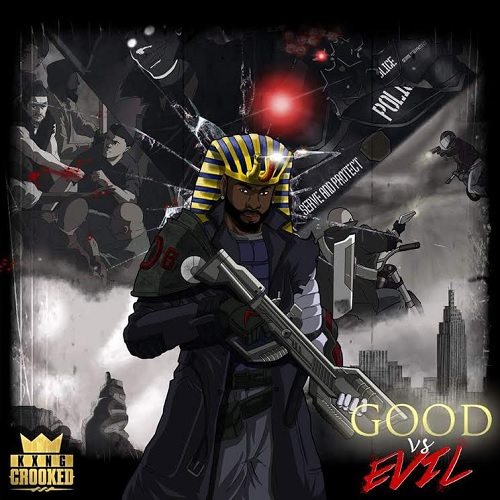