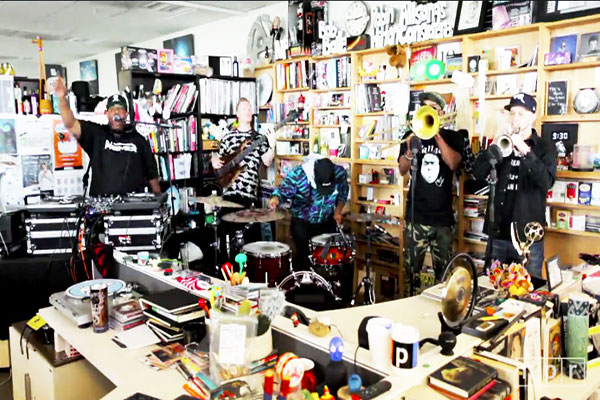 Three-time Grammy winner DJ Premier, one of the definitive architects of New York hip-hop, brought a new type of life to NPRâ€™s Tiny Desk: their first concert helmed by a DJ.

A packed house of head-nodding journalists grooved through their lunch hour to a nine-song medley of iconic Premier productions while decompressing from the unrelenting grind of the news cycle. The set list rested on the undeniable footprint of Preemoâ€™s classics, but this was more than just another DJ mix. His touring outfit, The Badder Band, overlaid Premierâ€™s blends with an undulating electric bass courtesy of Brady Watt, a steady accent on the one from drummer Lenny Reece and boisterous horns from Mark Williams and Jonathan Powell.

But it was Premier who remained front-and-center, commanding the crowd like a true party rocker. With throwbacks ranging from Gangstarrâ€™s â€œStep into the Arenaâ€ to an amped rendition of Jeru The Damajaâ€™s â€œDa Bitches,â€ embellished by The Badderâ€™s jazzy horns, Preemo concluded the set with a â€œMoment of Truth,â€ featuring the exalted rhymes of his posthumous Gangstarr partner, Guru.

Tiny Desk concerts are short by design, so naturally the format could barely scratch the surface of Premierâ€™s vault of street anthems, done for the likes of the Notorious B.I.G., JAY-Z, Nas, Kanye West, Big L, M.O.P., Mos Def, Group Home, Jeru the Damaja, AZ, Snoop Dogg, and many more. Even after a career spanning almost three decades, the man born Christopher Martin has managed to stay authentic to his analog grit and sample-chopping integrity, as if he were still an underdog.