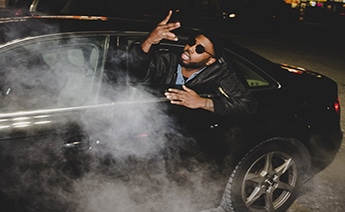 A promising young talent from Brampton Ontario (West of Toronto), Van Hill has steadily released a solid catalog of music that continues to grow his fan base. After dropping an EP titled â€œSad Day At Wonderlandâ€ in November 2016, Van has been releasing a string of singles, loose records and collaborations for most of 2017.

Van has a strong and relatable presence on his records and continues to stand out as an elite songwriter. With witty word play and double entendre, his lyricism and smooth melodies make for a captivating sound.

Speaking on the new records, “‘Plaza‘ is about Me and the guys that forever link up at the plaza. Either for some backwoods or some backwoods (haha,). It’s a religion, ain’t no way around it. No motive? You should just go home my guy, I’ve seen niggas do the most when there ain’t much to do. True story.â€

For the accompanying record Van says, ‘Stressed‘ is about how sometimes we get obsessed with this art thing we’re trying to do. Haven’t figured it out if it’s a good or bad thing yet, I guess time will tell, or maybe it won’t? Maybe we tell ourselves that for comfort, because we’re afraid of the future. A curse for living in the present I suppose. Watching the clock tick is like a bug; a tick.â€