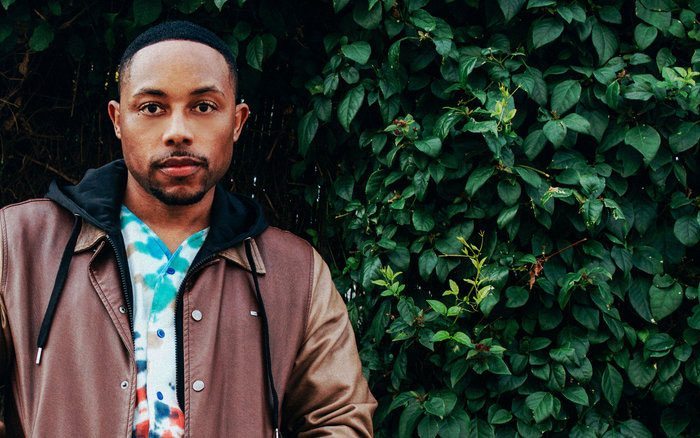 Los Angeles based emcee F.Y.I. presents the HighTopBully directed music video for “Trust Me”, the Dale Danja-produced single from his new EPÂ F.Y.I. Invented Green. F.Y.I. first gained notoriety in 2010 as part of trio Those Chosen on their EPÂ 5ive, produced mainly by Grammy-Award winning super-producer, IZ Avila. In 2012 F.Y.I. collaborated with Ab-Soul on â€œDopamineâ€, which appeared on his first solo mixtapeÂ Yo! The Places Youâ€™ll GoÂ which hit #1 on CMJâ€™s Hip Hop Charts. That year he also dropped an exclusive freestyle for HipHopDX. F.Y.I. says he was inspired to write his new single “based on my observation of the culture and how itâ€™s become so commercialized and watered down that people are starving to hear an emcee that they can trust to be raw and express themselves totally with NO false pretense fake sh*t.”

SFHH: What made you decide to become a rapper?

F.Y.I.: I’ve been an artist since birth. A creative being. It’s how God made me. I love to express myself and when I first heard hip-hop, I knew I wanted to be a part of it. I’m that carpenter laying wood, addingÂ new layers, adding some newÂ tile, new carpet, and so on. I’m building my own room in the house of hipÂ hop and inviting others to come sit down, put they feet up, vibe out to the dÃ©cor of my room.

SFHH: Whatâ€™s the first rap song you ever heard? Describe the moment.

F.Y.I.: The moment I knew that rap was dope wasn’t a specific song per say, it was more of the vibe I got when I used to kick it with my step-father and he used to play his mixtapes while we rolled around in his ride doing errands or what not. I would just be in the car rolling with him, vibing out,Â and in mind I was like this shit he’s playing right nowÂ is the hardest shit I ever heard in my life! The energy, the flows, the slanguage, the fashion on the album covers; whether it was Ice Cube, Nas, Common, DJ Quik, Snoop Dog,Â A Tribe Called Quest, whoever. It was bigger than one song, it was my culture, it was my community, it was like listening to older brothers give me game, it was me. I knew it in my soul from day one of being introduced it.

SFHH: How did “Trust Me” come together?

F.Y.I.: I linked up with the homie, Dale Danja, and he slid me a beat tape. On that beat tape was the track that would become “Trust Me”. Certain beats just speak toÂ me in way. This beatÂ was dark but futuristic and just had that next level vibe to it. So I wanted to come with them high caliber next level raps to match that beat but have a real concept to it not just bars for the sake of bars. OnceÂ you got the ingredients, you get your recipe andÂ thenÂ you can cook. Simple as that.

SFHH: What are your predictions for 2017, personally and in terms of the world?

F.Y.I.: Let me get my niggadamus on for a minute for all 2017 predictions! Naw, seriously, my goals areÂ to continue to grow as man spiritually, financially, and musically. Within that process, as long as I am walking with GodÂ thenÂ he will be able toÂ moldÂ me into being laser sharp with how I present my music to the worldÂ whether sonically, visually or with the stage performance. As for the world,Â Michael Jackson said it best, until we all look at the man (or woman) in the mirror and look deep into how that person can change then nothing will change. I know from my community, a lot of people are concerned about what is going to happen because America has a new president, but the reality is a president isÂ a person and whether you like that person or not is not the point, the point is he (or she)Â is not God or the supreme ruler of your life and you and only you canÂ help change your own situation. WaitingÂ onÂ a personÂ or systemÂ of government to change your situationÂ willÂ forever be disappointing to some degree and 2017 will be example of thatÂ for someÂ folks if that is their approach toÂ addressing things in their life that they want to see change. Niggadamus has spoken.

SFHH: How did your Ab-Soul collab happen? What was the experience like?

F.Y.I.: At that time, I was in a rap group that was gaining buzz and my camp presented the idea toÂ us about collaborating on aÂ song with him. I cooked up the concept for Dopamine. And the rest is one for the record books.