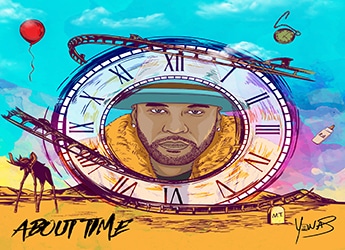 Yonas is “King of the Summer” with ‘About Time’ album.

Now is the time of the independent artist. YONAS is one such emcee who has been carving out an impressive career for himself, becoming a blueprint for indie success. He has sold hundreds of thousands of units and accumulated hundreds of millions of streams – consistently earning himself slots on the iTunes and Billboard charts. The Bronx-nativeâ€™s sights are set on breaking through with his highly anticipated new album, ‘About Time‘ which hits the street today, June 29th.

By being able to blend thought provoking lyricism with feel good music production and melodies, YONAS has created an album that will be the background music for anyone working towards a goal bigger than themselves.

According to YONAS the album was a labor of love and is about having the grit to find success. He shares, â€œWeâ€™re all working towards something bigger than ourselves. Roadblocks and tribulations are things we all go through chasing success and chasing our dreams. This project embodies that journey. It speaks to the fact that eventually, we will get our moment. Eventually all the hours weâ€™ve put into our crafts, all the days and nights weâ€™ve sacrificed for the bigger goal, eventually, itâ€™ll pay off.â€