Megaciph drops off his “All Dreams Anyway” single.

White Plains, New York emcee Megaciph (“Mental Energies Gather And Circulate In Positive Harmony”) presents “#AllDreamsAnyway”, the Official Stichel-produced single from Megaciph’s third album CIVILiAM (Bandcamp), which captures the stories and emotions from his time in the US Marine Corps. A devoted peace activist, he has partnered with Veterans For Peace to donate 100% of the album sales from CIVILiAM to VFP’s anti-war mission. In 2014 he was invited to the VFP annual convention in North Carolina as a performer.

In April 2015 Megaciph performed at the Peace and Planet Nuclear non-proliferation convention in NYC. “‘All Dreams Anyway’ comes from the reality that far too many young men of color are faced with, and me having lived that reality,” Megaciph says. “I was a knucklehead doing knucklehead things for too many years of my life. A lot of it was anger left over from the Marine Corps, and from the pain and daily struggle of being Black in this racist society. The American dream is broken and we celebrate it everyday, so this is a cynical portrayal of that celebration with the internal struggle made visual for the audience.” 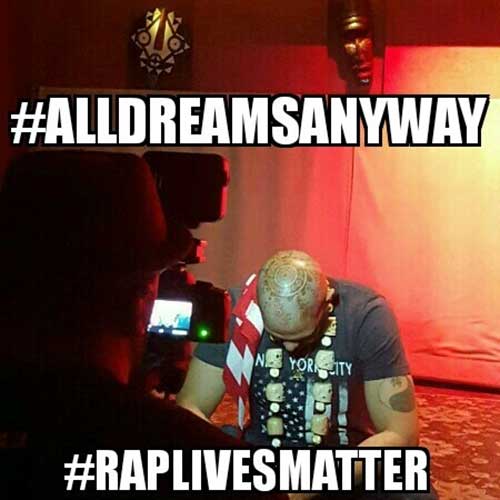