60 EastÂ is back with a new single titled ‘Almost There’.

After starting the year off strong getting invited to headline Winterclash, the biggest rollerblading competition in the world, this year just outside of Amsterdam then continuing on to his 2nd Headlining European Tour, West Coast Artist 60 East returns with the Artwork and Single to his new project.

Almost There is the first Single off “The Freeway Series Vol.2: Cruise Control”, which is the sequel to 60 East’s critically acclaimed EP debut. For the follow-up, 60 East collaborated with East Coast producer Phil The Pain, who produced the project in its entirety. The Music Video for “Almost There” will be dropping June 6th and features cameos from A-F-R-O, Devin The Dude, Mr. Green and Tek of Smif N Wessun. The EP is set to release June 20th but you can get an early copy on 60’s Website. Until then, listen to ‘Almost There‘ below. 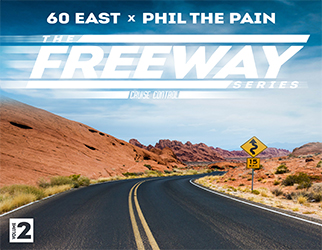