A decade in the making, Krayzie Bone and Young Nobleâ€™s Thug Brothers 2 is the follow up to the highly-successful collaboration project from two of hip hopâ€™s legendary groups; Bone Thugs-N-Harmony and Outlawz.

The first Thug Brothers album was a collaborative effort by Layzie Bone and Young Noble, but for the sequel, Krayzie Bone picks up where Layzie Bone left off.Â  There is an undeniable artistic chemistry between these two hip hop legends as they both detail their respective parallel journeys through hip hopâ€™s evolution and history.

Stories of tragedy, struggle, and loss are painted with incredibly descriptive lyrics and emotion, while giving the fans redemption, triumph and ultimate victory by two legends that have cemented their place in hip hop history.Â  Today, the duo unleashes the first single, â€œRolling Stone,â€ from their forthcoming collaborative sequel.

Bone Thugs-N-Harmony & Outlawz Thug Brothers 2 will be released on 6-16-17 by Real Talk Entertainment. 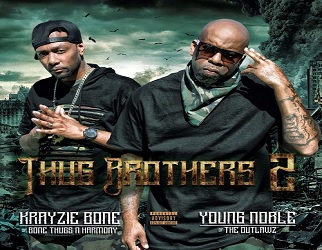