G.FisherÂ is back with another DJ Premier produced joint called ‘Choices’.

For the past 9 weeks, the rising Bronx MC G.Fisher has been dropping an unreleased exclusive from his vaults for his #FishFrys (FisherFridays) series. This weeks #FishFrys is an extra special DJ PremierÂ produced Banger called “Choices” where Fisher gets to show off his immense story telling ability.

This track was made its world premiere on Friday when the legendary DJ Premier himself dropped it on his “Live From Headquorterz” radio show on SiriusXM.
Recorded in the legendary DND StudiosÂ before it closed and slated for G.Fisher’s mythical “God MC” project, but never released because the track was used by evidence from Dilated Peoples and also on DJ Premier’s ‘Beats That Collected Dust’ vol 1.Â Today G.Fisher and DJ Premier decided to open the vault and let the world hear “what a real MC sounds like.” 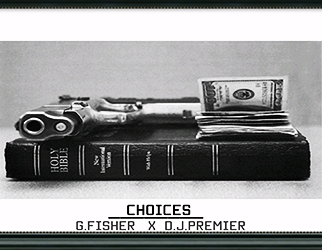