The legendary Kool G Rap returns with â€˜Return Of The Donâ€™ which will be released on 6-2-17.

Hip Hopâ€™s golden era constituent, Queensâ€™ native, the godfather of Mafioso rap, legendary and influential emcee, Â Kool G Rap, broke out in the late 80s and early 90s as one half of the duo with DJ Polo. Together, Kool G Rap and DJ Polo released three undisputed classic albums; beginning with their debut album, Road To The Riches (1989), Wanted: Dead or Alive (1990) and Live and Let Die (1992).

After a successful run with DJ Polo and the Juice Crew, G Rap embarked on a solo-career, with his solo debut, 4, 5, 6, appearing in 1995, which was preceded by Roots of Evil (1998) and The Giancana Story (2002) which featured AZ, Nas, Joell Ortiz, Mobb Deep, and CNN. Six years later, G Rap released Half a Klip (2008), which included production from DJ Premier and DJ Marley Marl.

Kool G Rap states â€œThe Return Of The Don represents; an amalgamation of past, present and future and a tribute to some of my most favorite spitters worldwide; this is my salute to those artists.” 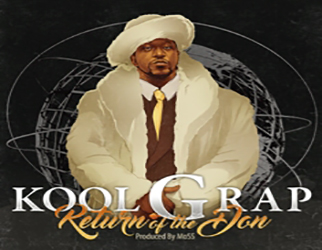