MikeyyAustinÂ debuts on SpitFireHipHop with ‘Supa-Fly’.

Michigan rapper MikeyyAustin styles over Jackson, MI, producer, YoungHeatâ€™s soulful production on new single, ‘Supa-Fly’, featuring Sareem Poems. MikeyyAustin is getting set to release his debut album, L I F T E D, on 5/19/2017. Nothing but positivity is exuded from Mikeyy and it shows in the new single, Supa-Fly. The co-sign by Sareem Poems stamps encouragement and flavor as the song continues to hint the album’s theme, L I F T E D.

Mikeyy had this to say of the single: “I wanted to tell my story in a stylish way. The idea that no matter what happens in my life, I have to ability to rise above it, that is what makes me ‘supa-fly’.” – MikeyyAustin 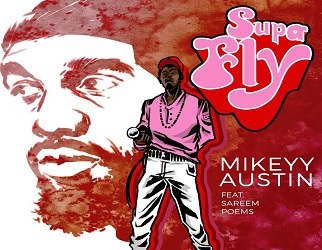