Mozzy andÂ Gunplay are back with another new single titledÂ ‘That Eazy’.

For fans of real gangster street music, Mozzy & Gunplayâ€™s formation as a duo has to skyrocket to the top of their most anticipated list.

Cut from the same cloth, we have two of the most respected and credible gangster rappers coming together to represent both the East and West Coast.Â  Hailing from Sacramento, Mozzy has taken the internet and social media world by storm and is arguably one of the hottest independent rappers in hip-hop.Â  MMGâ€™s Gunplay is following up his debut album, Living Legend, which debuted at #11 on the Billboard hip-hop chart and featured collaborations with Rick Ross, Yo Gotti, YG, Stalley, Curren$y, DJ Mustard & Tyler Woods.

Dreadlocks & Headshots takes you on a journey of struggle, survival, and ultimately; triumph.Â  Two rappers from opposite Coasts ultimately having eerily similar stories and life experiences, bring together a project that is not to be missed.

After announcing their collaborative union with ‘They Know,’ Mozzy andÂ Gunplay are back with a new single, ‘That Eazy,’ which was exclusively premiered by HotNewHipHop; and as they both skate all over this track, they show it really is â€œThat Eazy.â€ 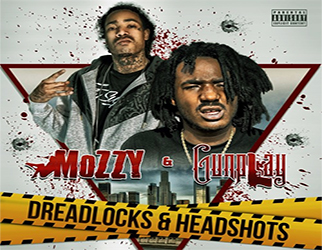