Page Kennedy connects with a team of spitters on ‘Made You Look’.

Page Kennedy continues to turn heads with his lyrical skills. His most recent release of ‘The Story Of O.J.’ remix proved that old and new in Hip Hop can accept what each has to offer. This new single track, ‘Made You Look‘ include bars from from some real MCs such as KXNG Crooked,Â Elzhi, Mickey Factz, Cassidy and King Los.

Page Kennedy is preparing the release of ‘Straight Bars’ mixtape on August 18. Do not look for too many features on the mixtape as Kennedy can hold his own without help from other MCs. Press play on this one and enjoy. 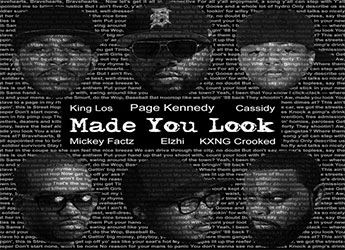