Continuing on the road to his solo-debut,Â Blaq RoyalT, Slum Villageâ€™s Young RJ treats fans to his new single, â€œIssues,â€ featuring BJ The Chicago Kid; which was exclusively premiered by Okayplayer.

‘Issues’ is a creative collaboration between two artists that share a similar artistry and background. The pair previously collaborated together on ‘Expressive,’ which was included on Slum Villageâ€™sÂ YESÂ album and the duo link up again as RJ delivers thought provoking lyrics withÂ â€ªBJ the Chicago Kid finessing the track with his soulful vocals and paint a picture of our current political climate, inner cities, and of course… personal inner demons.Â “This collaboration could have not come at a better timeâ€ Young RJ commented to Okayplayer. â€œGiven the economic struggles in cities like Detroit and Chicago, current police violence and our current political climate.â€

‘Issues‘Â is the third single from RJâ€™s forthcoming,Â Blaq RoyalT, which is slated to be released onÂ 10-10-17.Â Â It follows ‘Huh?’ and ‘Wait‘ featuring Pete Rock & Boldy James. 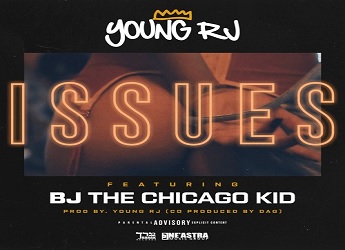