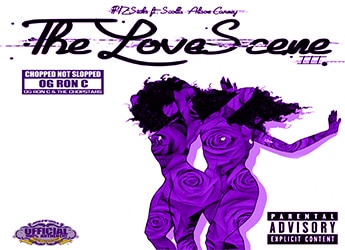 PHZ-Sicks gets a remix of his ‘The Love Scene III’ from DJ OG Ron C.

PHZ recently released 100 signed copies ofÂ The Moment II: A Good Day, a vinyl that combines songs from his last project,Â The MomentÂ as well as his next project,Â Good Day, Greater Tomorrow, of which two songs have been released: “Run It” and “Riot In My Memory“.

PHZ-Sicks is releasing a new single from the album on the 23rd of each month leading up toÂ Good Day, Greater Tomorrow‘s summer drop. Born in Texas, PHZ says â€œmy love for chopped and screwed also feels like my connection to my birth state. I didnâ€™t live long there but the music, lifestyle, and entrepreneurship of artist in Texas always felt like an extension of me. To have a legend like OG Ron C, who not long ago put out an amazing chopped not slopped for the filmÂ Moonlight, means the world to me.

Itâ€™s moments like this that lets me know Iâ€™m doing something right and I want to make sure I have more moments like this.â€ Ron C’s remix of “Love Scene III” is exclusively on PHZ’s Soundcloud page – check out the original versionÂ here