3 hours ago
OneShotAce Is Back With “Resonate” Visual Feat. Benny The Butcher
7 hours ago
2023 BMW i7 xDrive60: The Ultimate Electric Driving Machine
22 hours ago
Indigo Phoenyx & Kwenu Deliver “Red Brick Dust” EP
1 day ago
Vevo Celebrates 50 Years Of Hip-Hop
1 day ago
Rosito Dinero Gives Us His Life’s Motto & Talks Growing Up In Baltimore 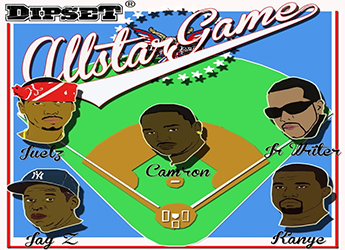 WalyO and The Diplomats connect with Jay Z and Kanye West on this new ‘Allstar Game’ release.

WalyO debuts on SpitFireHipHop with his latest release “Allstar Game” where he pairs The Diplomats members Camron, Juelz Santana and JR Writer with Jay Z and Kanye West. The track serves as a teaser from his forthcoming project “We Still Bangin” where he creates a number of original and creative tracks, in Dipset manner, comprised of both rare unheard featured acapellas and chopped/reworked classic verses to bring fans new music from the veteran crew whom they have been hungry to hear from for the past decade.

The mixtape comes to you in the likes of fellow producers like Amerigo Gazaway and Tom Caruana, to not only show off the talents of the production of the longtime beatsmith, but also the opportunity to hear your favorite rappers on fresh new beats.