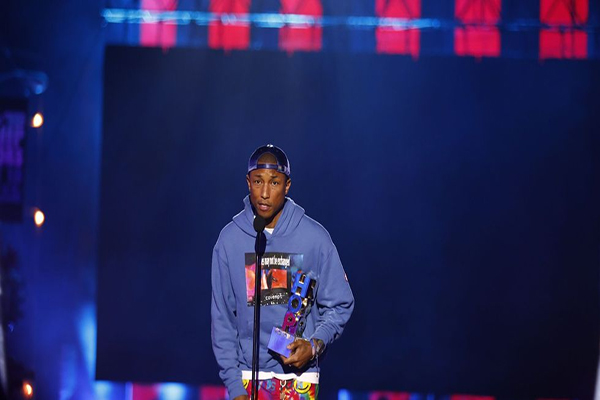 Watch Pharrell as he provides an impromptu speech about the social climate in the United States during VH1’s ‘Hip Hop Honors’.

VH1 aired their annual Hip Hop Honors yesterday, paying tribute to the artists and movements that have defined and influenced Hip Hop culture. VH1 switched it up this year. Last year they paid tribute to the ladies of Hip Hop and this year paid homage to the ’90â€™s Game Changers’ paying homage to that era of Hip Hop, television, and film. Honorees include Martin Lawrence,Â Mariah Carey, Jermaine Dupri, Master P, and director Hype Williams.

One of the more memorable moments from the night came when Pharrell, who took it upon himself to speak to the audience and viewers about the social climate in the United States.

Pharrell implores fans and viewers watching to â€œopen their eyesâ€ and see whatâ€™s happening in our society. â€œIf you look like I look, then you know how we got here. But weâ€™re here and weâ€™re not leaving, so what are we gonna do.â€

He continued and added: â€œFor everybody else in this countryâ€¦donâ€™t think because theyâ€™re coming at the African-Americans and the Jewish community and the Hispanics that it canâ€™t be you too just because you look like them,â€ he warns. â€œYou should understand â€™theyâ€™ can change their minds and it might not be about Black, white, big, skinny or small. It could be about facial features. It might be about hair color. Donâ€™t act like they didnâ€™t do that before.â€

Watch the entire speech below.