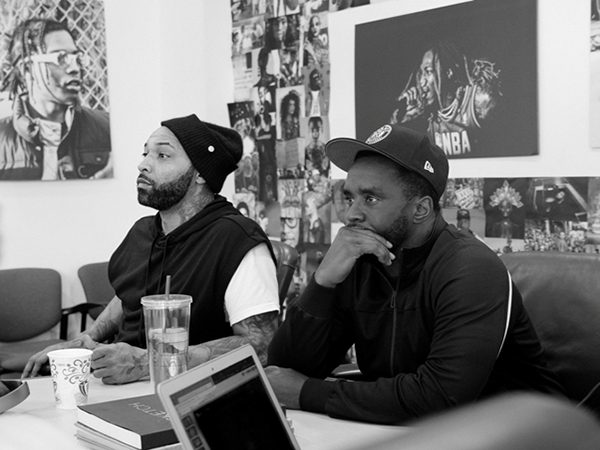 Sean â€œDiddyâ€ Combs announced today that Hip Hopâ€™s preeminent media pundit Joe Budden has inked a deal with his network, REVOLT MEDIA & TV. Budden, a veteran MC known as one of the most outspoken voices in hip hop, will create, executive produce, and host â€œState of the Culture,â€ a brand-new talk show due to premiere this summer, where heâ€™ll lend his distinctive voice and unique perspective on current topics, politics, social issues, and more, all through the lens of hip hop. Compared to standard talk shows, â€œState of the Cultureâ€ will deliver raw, unfiltered, and informative debates and interviews where Budden digs deep with prominent celebrities, artists and personalities.

â€œFinally, Joe Budden is officially part of the REVOLT family,â€ said REVOLT Chairman Sean â€œDiddyâ€ Combs. â€œJoe has an authentic approach and heâ€™s never afraid to speak the truth. His many talents deserve a platform that pushes the culture forward and we are excited to produce next-level content with him.â€

â€œIt was important to partner with a company that recognizes the growing need for our voices and ideas to stream freely without interruption. That was a much prettier way to say, we bout to be with the shits,â€ saidÂ Joe Budden. â€œThank you to my business partner Ian Schwartzman and REVOLT for the opportunity to highlight my brutal honesty, passion and integrity. Â I love REVOLTING!! Together, we will continue to take this thing to heights unseen.â€

â€œWe are excited to launch a new era of REVOLT content with Joe Budden,â€ said REVOLT CEO Roma Khanna.Â  â€œThis is just the beginning of more great things to come as REVOLT leads from the center of Hip Hop culture.â€

Joe Budden comes to REVOLT after hosting the networkâ€™s 2017 year-end special entitled This Year Was Dope/Trash, with co-host Charlamagne tha God. During Diddy’s recent New Year’s Eve bash, the mogul and Budden teased their partnership in a video clip posted to REVOLT’s Instagram page. “Are you ready to get money with me?,â€ Diddy said. â€œAre you ready to put this Black excellence on a whole other platform?”

Budden currently hosts his own groundbreaking podcast The Joe Budden Podcast, alongside Rory & Mal. Prior to being an on-air personality, Budden was an esteemed rapper, both as a solo-artist and as a member of the super-group Slaughterhouse. Joeâ€™s most recent project, 2016â€™s Rage & The Machine debuted at #1 on the iTunes & Billboardâ€™s Rap/Hip-Hop chart.