Izzy Strange debuts on SpitFireHipHop with hisÂ ‘A Good Day 2 B The Bad Guy’ album.

After two full years of rigorous work and a lifetime of feelings to share along the way, Izzy Strange debuts his sophomore album, ‘A Good Day 2 B The Bad Guy‘.

The Beasley’s Corner Bodega co-founder looks towards the intense production skills of Grammy Award winner Nate Fox & Casa Nada for a majority of the track listing. Izzy also set the bar high during the album’s recording process. One of his goals was to feature artists that he personally enjoyed and found to be inspirational to his career. Those artists included Mick Jenkins, Blu, Open Mike Eagle and Eligh (Living Legends).

He’s dropped six singles from the album so far, including two videos forÂ “Real Love”Â andÂ “God’s Got A Gun”. Still, some of the album’s most personal songs have yet to be heard until now. Tracks like “Everybody Has A Story” and “Making Movies” will send chills down your spine from the lyric’s brutal honesty. Strange made this statement about the project:

“A Good Day 2 B The Bad Guy”Â represents the stigma that chasing your dreams brings. The project revolves around the obstacles of the pursuit and what comes along with it. It also serves as a statement to prove that even thru the doubts and struggles, I’m here to stay. Music is my sole calling and I’m willing to go to any lengths to prove that. It was time to finally tell my story and share it with the world. I hope listeners appreciate the music and take away just as much feeling as I put into making it.Â Besides the aforementioned contributors; Netherfriends, Danny G, Red Pill, Tahlyn, Mike Incite and DJ Halo all lend their musical talents to AGD2BTBG. It’s an album that was crafted to be played from start to finish, a true work of art. Without further ado, Izzy Strange proudly presents “A Good Day 2 B The Bad Guy”. 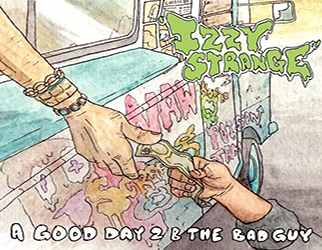