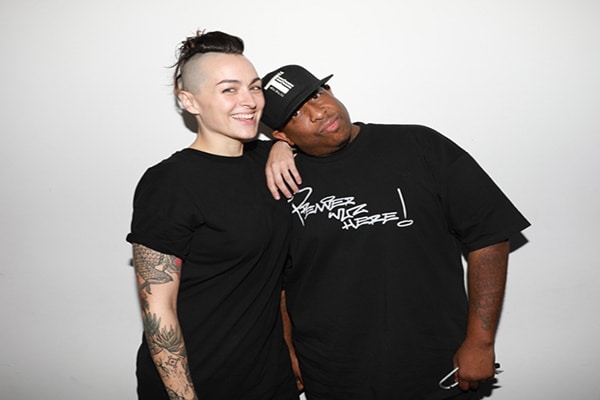 Torii Wolf creates a ‘Flow Riiot’ with DJ Premier on her debut album.

Torii Wolf has emerged onto the music scene as if she was shot out of a cannon.Â Thanks to her sultry voice, range and musicality, Torii has enjoyed a precipitous rise.Â  Leading up to her solo-debut, Torii has already premiered music with Pitchfork, Complex, Pigeons & Planes, Billboard, Genius, Highsnobiety, Mass Appeal, Vibe & Okayplayer and been tapped for Vevoâ€™s â€œdscvrâ€ series (past alumni include Sam Smith, Alessia Cara, Tove Lo, Hozier & DNCE).

With an iconic producer who has a habit of producing and contributing to classic projects manning the boards, Torii Wolf & DJ Premierâ€™s forthcoming collaborative union bum-rushes the walls of genres, age and expectations to let the world know a Flow Riiot is upon us.

However, â€œPreemoâ€ as heâ€™s affectionately known, has always been a conduit for artists of all genres to affix their lyrics to his complex rhythmsâ€”Dâ€™Angelo, Janet Jackson, Miguel, Anderson .Paak, Lion Babe, Macy Gray, Neneh Cherry, Maroon 5 & Christina Aguilera (which his work won two Grammyâ€™s for) to name just a few. Throughout it all; Grammyâ€™s, Platinum & Gold plaques, undeniable icon status, Premier has orchestrated a sound that remains a hallmark of positive and advanced music.

While Preem has previously collaborated with fellow iconic female artists, in none of the aforementioned examples has he taken the reigns to not only produce the bulk of the material, but too also serve as executive producer.Â  With a resume like Premierâ€™s it takes a lot to get his attention—and perhaps more importantly; his respect.

Enter Torii Wolf, a singer/songwriter from Wantagh, New York who traded coasts-bouncing around West Coast cities and in doing so enhanced herself artistically; shunning categories, genres, confinement and convention. â€œTorii has such a weird, wicked styleâ€ Premier offers.Â  â€œItâ€™s just very left field-reminiscent of Bjork.Â  She is just very unique and versatile; she writes, sings, is an accomplished guitarist and drummer.Â  But image wise, there are no comparisons.Â  Subject matter wise, Torii is in a whole different place.Â  Torii is truly one of a kind.â€

The diversity of the subject matter that Premier touched on is a staple ingredient on Flow Riiot.Â  The anthemic lead-single â€œFreeâ€ tackles the battle we face every day to be our authentic selves and a reminder that our freedom comes from within and how we hold the key to how â€œFreeâ€ we really are. â€œFreeâ€ features Flow Riiotâ€™s lone-guest, Macklemore, who battles ego, spars bare-knuckle with the devil and trains with God and asserts â€œas long as Iâ€™m me, then you know that Iâ€™m free.â€Â  Toriiâ€™s heart pumps cold and warns of impending doom over a virtual digital symphony and scratch chorus from Preem on â€œBig Big Trouble.â€ Conversely, Torii professes her undying love on â€œIâ€™d Wait Forever And A Dayâ€ as Preem recruits his The Badder Band to add lush instrumentation for a sultry big band ballad that Toriiâ€™s voice longingly soars over. The stirring Mike Zombie (of Drakeâ€™s â€œStarted From The Bottomâ€ & OVO fame) produced â€œPain Killerâ€ is the audio equivalent of an opioid, replete with Toriiâ€™s pleas to euthanize her anguish, yet so ultimately stimulating it creates a high you canâ€™t stop craving.

Flow Riiot crescendos with an omnipresent vibe, as Premier creates a diverse palette that exquisitely accentuates Toriiâ€™s vast vocal range, a veritable combination of contemporary and future sounds.Â  Torii spins out of control over the whirlwind of horns and drum orchestration on â€œYouâ€™re Not Thereâ€ and â€œWhere We Belong.â€ â€œShadows Crawlâ€ is quintessential Preem, dirty boom-bap with waves of shimmering piano keys which add further restlessness to Toriiâ€™s meditation on insomnia and the battle to unplug.

Torii Wolfâ€™s debut solo-album, Flow Riiot, will be released on September 29, via DJ Premierâ€™s TTT (To The Top) imprint.