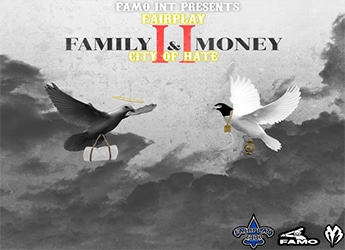 Fairplay is back with the new ‘Family and Money 2 (City of Hate)’ LP.

Fairplay is a lyrical assassin, using his gritty street tales from the crime ridden streets of Chicago to capivate listeners. He has a penchant for 90â€™s Hip Hop, utilizing the old school mentality with a new school flavor. In the last few months Fairplay has perfected his skills behind the camera, dropping 2 well received visuals in anticipation for his highly anticipated full length Friends, Enemies, Demons & Saints. We really get to know him as a man, friend, and emcee. By the end youâ€™ll be rooting for him to make it out of the city.

Fairplay is also family man, and has just dropped his second compilation tape Family and Money 2 (City of Hate). While Fairplay makes up the bulk of the tape, he enlists features from his crew that has created a grass-roots movement in Chicago.

At 14 tracks itâ€™s a perfect introduction to the MC, full of his wit, creativity, and of course lyrical genius. The mixtape title says it all, as Fairplay isnâ€™t afraid to speak candidly about the atrocities in the city.