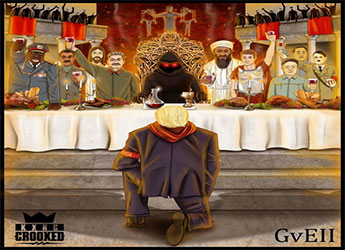 Listen to KXNG Crooked’s new album ‘Good Vs Evil 2: The Red Empire’ before it drops tomorrow.

Almost a year ago today, KXNG Crooked released a manifesto in the form of Good Vs Evil.Â  To rewind, Donald Trump had just been elected the 45th President in one of our most controversial presidential elections, divisiveness infiltrated every aspect of the populous, governmental agencies were willingly pumping poison into its communities, protests were raging in the streets, unprovoked police brutality was rampant (with zero accountability) and the societal divide widened with each passing day.

With a seemingly basic disregard for human rights, it was understood that we were living in a complicated and dangerous time.Â  People were in search of answers and a unifying message; KXNG Crookedâ€™s Good Vs Evil could not have appeared at a more needed time as he delivered a project that stared into the face of oppression and struck a nerve.

Thankfully, KXNG Crookedâ€™s Good Vs Evil 2: The Red Empire picks up right where its predecessor left off. On the surface, Good Vs Evil 2 is the epitome of woke; a politically and socially conscious decree that demands to be heard and processed.Â  At its core, itâ€™s designed to be the theme music that Colin Kapernick and a generation can proudly knell to.

Good Vs Evil 2 is just as incendiary, authentic and unapologetic as its predecessor and that is evident by the projects cover art.Â  â€œThere are a few messages I wanted the artwork to communicateâ€ Crooked asserted.Â  â€œOne is the thin line between good and evil. Sometimes there’s light in villains and darkness in heroes. I also added a figure that may be a bit controversial and that’s the widely accepted image of Jesus Christ. No shot at Christians, but that particular image of Christ symbolizes death, slavery and colonization to many. Most American slave masters and the Klu Klux Klan members hang that image on their walls and truly believe themselves to be Christians. I’m trying to open doors to taboo conversations. And lastly, the Trump figure is â€œRed Hood,â€ the albums new enemy of justice being inducted into the Tyrants club and kneeling like the football players for what he believes in; hatred and division.â€Â KXNG Crooked’sÂ Good Vs Evil 2: The Red EmpireÂ drops tomorrow, December 8.

Tracklisting and Credits for KXNG Crookedâ€™s Good Vs Evil 2: The Red Empire: