D.Focis uses production from 9th Wonder for his new ‘The Detroit Wonderful’ mixtape.

In continuation of his ‘Legacy Series’, which includes separate projects over production by J.Dilla (Herman Gardens Project), Madlib (Music for Bougie Dogs) and Kanye West (94 West), D.Focis crafted the 9th Wonder assisted ‘The Detroit Wonderful‘. The 10 track album is half vintage soul by 9th, and half superb lyrical showing by the Detroit MC.

D.Focis’ music is a refreshing blend of Hip Hop and R&B,that focuses on everything from relationship issues to personal struggles. The introspective and positive nature of his music often leads to comparisons with other artists such as J.Cole, Kendrick Lamar, and Kanye West. However, after a careful listen, one will recognize the clear difference in the music. “I’m from the Midwest, so my influences are very wide. I make real music for real people” says D.Focis.
As a producer, D.Focis has been a busy man the last 10 years, having produced over 100 published titles worldwide. His US resume includes artist such as Killer Mike, Aloe Blacc, Swifty McVay, Nappy Roots, Arrested Development and many others. 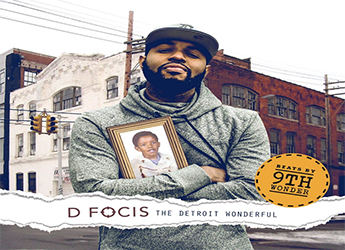