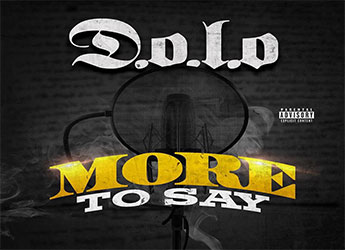 D.O.L.O. makes his debut on SpitFireHipHop with his new ‘More To Say’ mixtape.

Jackson, Mississippi’s own D.O.L.O. has been putting in work in the past few years in effort to surpass his peers in the rap scene. The work is showing off with the release of his latest project “More To Say“. On the mixtape he makes it quite clear that he is aiming for the top, showing a certain urgency on songs like “Glory Road”, “Say Less” and the title track. Furthermore he shows an ability to keep things versatile with more upbeat songs like the lead single “Sucka Free” and emotional ones like “Hate Love”. All-in-all the tape shows that D.O.L.O. is a lyricist to pay attention to and that he indeed does have more to say.