2 days ago
BeMyFiasco and TV Star Marcus Callender Share Tender Romance In New ‘U And I’ Video
2 days ago
Rock The Bells Announces Hip-Hop Cruise In Partnership With Sixthman
2 days ago
Lord Willin Releases The Visual For The Redd Rebel Prod. “This Is Revenge”
3 days ago
The Big Boss Slim Thug Is Launching His Own Meal & Collector Cup at Checkers
3 days ago
Del Haze Barrages In “Who Am I?”

Czarface leaves “Two In The Chest” on his new single.

Czarface (Wu-Tang Clan’s Inspectah Deck & 7L & Esoteric) is back! Fresh off the heels of their â€œAll In Together Nowâ€ collaboration with Marvel Comics the trio continues to combine music and art with their latest release A Fistful of Peril, which will be released on 11-4-2016.

The back story of this album begins in the summer while Deck and Esoteric were in the studio recording some new Czarface material. During this time Marvel Comics had reached out to Czarface wanting some music to soundtrack their Black Panther web series, promoting their breakout comic of the same name. This Marvel meeting spawned the lead track “All In Together Now” and served as the primary inspiration for a fleshed-out album that nobody saw coming. The group camped out in the studio playing beats, talking comics, video games, and pop culture….what came about was A Fistful of Peril.

Starting the album off with the ARP keyboard odyssey of “Electric Level 1” is like entering the vortex of color and light in Kubrick’s 2001. The aptly titled “Two in The Chest” showcases Deck & Eso’s ability to deliver punchlines and pop culture references with ease over an exceptional bass and guitar combo. ” 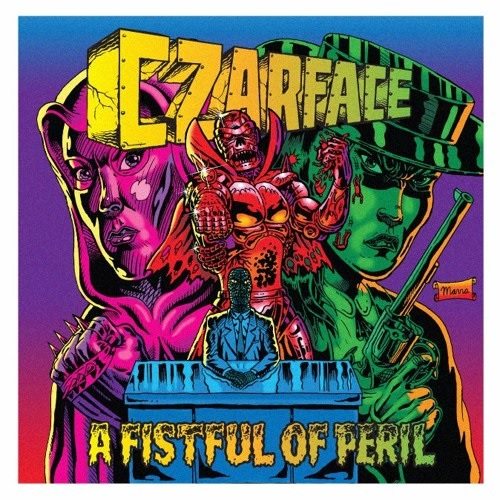