‘Youth In Revolt‘ was created in an elegant flophouse (more on that later) and you can hear remnants of the crazy creative atmosphere running all thru the track.Â  “That whole Malibu trip was insaneâ€ Brady recalls to XXL.Â  â€œI was there for two and a half months, living in a mansion (essentially in paradise) rent free. Someone conned the people renting the house out of a bunch of money and about a week after I moved out they were forced to flop on the rent. Everyone then had to bounce and the whole situation evaporated into thin air; almost like it never existed. Luckily, I was making music every day up there so I feel like I have record of it. You can hear that on “Youth In Revolt.â€

While Michael Christmas didnâ€™t know the back-story on the elegant flophouse, he did concur with the vibe, as he lamented â€œI sat on this hill in Malibu thinking about what I wanted to make and we ended up with the craziest song I think I’ve ever made. I knew I was with one of my favorite musicians in the world, so I was like let’s try something different.â€ 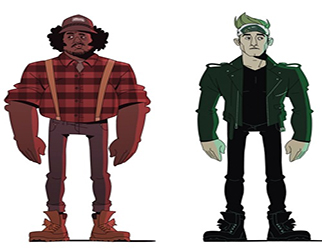