Representing the Dallas hip hop movement, Dorrough AKA Dorrough Music, AKA Six 3, has garnered critical acclaim for his organic delivery and personal take with his listeners.Â  His debut album, Dorrough Music, peaked at #2 on the Billboard hip-hop chart and Durrough has since accumulated over 8 million units sold. While he is best known for his singles â€œIce Cream Paint Jobâ€ (#27 on Billboard Hot 100), â€œWalk That Walkâ€, â€œGet Bigâ€, and â€œBeat Up The Block.â€ Durrough is a true independent music success story, as with the aid of his massive singles, he has held his own against the best of the best major label artists.

A lifelong Dallas Cowboys fan, Dorrough realized a dream at the tail end of 2016, as he announced a merchandise collaboration with his hometown team; the first of its kind in the NFL, this after he created the Dallas Cowboys anthem â€œOur Time.â€

Dorrough is back and will release his much anticipated third studio album, Ride Wit Me, on 5-19-17 via Real Talk Entertainment.Â  Consistent with his past success, Ride Wit Me brings instant party starters, clever punch lines, catchy hooks and trunk rumbling beats that bring the Texas street boom.Â  Ride Wit Me is a definite must have for loyal Dorrough fans and new fans alike.

Today, Dorrough releases a new single, â€œRight Now,â€ which is being offered as an instant grat track with the pre-order for Ride Wit Me. 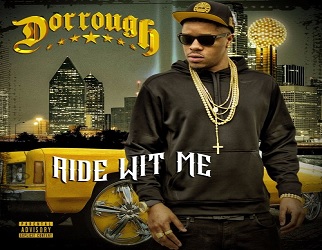