Fred The GodsonÂ and Dave East connect for this new single, ‘G5’.

Fred The Godson first appeared on the national radar after being named a XXL Freshman alongside Kendrick Lamar, Meek Mill and Mac Miller in 2011. The South Bronx native is a respected emcee and has collaborated with some of the biggest names in hip-hop, including Diddy, Mary J. Blige, Pusha-T, Raekwon, Kevin Gates, French Montana, Jadakiss and more. His mixtapes have had millions of impressions on Datpiff and as a staple on the New York hip-hop scene, Fred The Godson frequently appears on radio shows on Hot 97 with Funkmaster Flex and DJ Enuff, The Breakfast Club on Power 105, and Sway In The Morning on Sirius Radio.

Since his freshman class, Fred has been not only working with top names in hip-hop but also honing his craft and building friendships and relationships throughout the industry. After several years of, Fred The Godson is putting the final touches on what will be his long awaited debut studio album. The album is slated for a 2017 release and features hip-hop heavyweights Rick Ross, Fat Joe and many more. Ahead of his long-awaited full-length record, Fred The Godson is dropping a fresh mixtape on August 18th entitled Gordo that will showcase his growth. Today heâ€™s teamed up with XXL to give fans a taste with an exclusive first listen of his track ‘G5‘ featuring Harlem-born rapper Dave East. According to Fred the Godson â€œstraight gutter, New York City hip-hopâ€ inspired the song and the tracks savage beat called for collaboration from a fellow NYC hustler like Dave East. 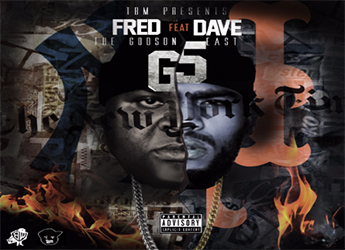