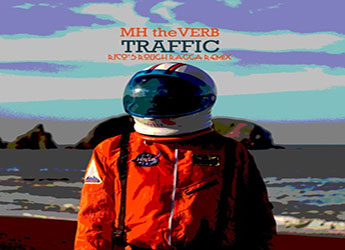 MH The Verb drops off the Rough Ragga Remix for ‘Traffic’.

On the heels of theÂ otherworldly introductionÂ to the new science fiction (s)heroÂ Afronaut, rapperÂ MHÂ theÂ VerbÂ taps producerÂ Erik RicoÂ for the ‘Rough Ragga Remix’ of his new single, ‘Traffic’. With writing and production credits for stars such as Q-Tip, Jasmine Guy, TreÂ (of The Pharcyde), and more, Rico takes cues from J Dilla and Jay-Z for his funky departure from the original record.

“[When creating the remix] I was just thinking in terms of it coming on at a party where EVERYTHING played is hitting the 2/4 and then BOOM… You’re in the company of [Jay-Z’s] ‘Bam’ and ‘Lost Ones’, not to mention it’s such a departure from the original. It’s a more dance-able version, influenced by dance-hall and afro-beat vibes. So I went into it thinking… ‘Ok, the original already has a straight 2/4 Dilla type of vibe’… so I took cues.” – Erik Rico