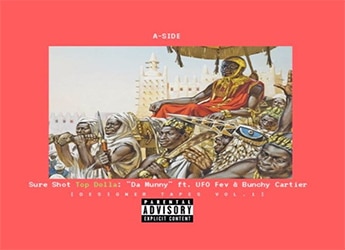 Amityville MC Sure Shot is putting the final touches on his first solo project of 2017, The Designer Tapes Vol 1. As Sure Shot is coming off the heels of a lengthy album release in February, No Hook 2 with his Dunbar partner Bunchy Cartier and the brief EP alongside Bunch and Harlem’s own, Rap’s New Generation / Roc Nation signee UFO Fev, The Birds & The Bees. Sure Shot feels now is his time to show why he is one of the ‘Top Dolla’ spitter’s off his Island. This quarter, Sure Shot lets us know why he doesn’t take breaks from ‘Da Munny‘ all over the hardest of theme music Josh cuts.