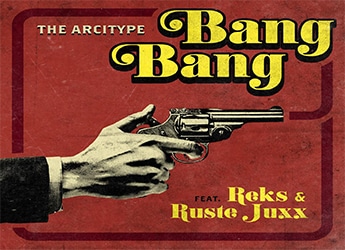 Five years ago this month (9-25-2012 to be exact), The Arcitype and Ruste Juxx released their collaborative album, V.I.C. Victorious Impervious Champions, on Duck Down/AR Classic Records.Â  As a relative unknown in 2012, it was The Arcitype’s most visible project and an introduction to the industry of hip hop.

V.I.C.Â  paired The Arcitype’s musical sample-free production with Juxx‘s Crown Heights charisma and street knowledge.Â  The results took both artists into new territories with songs/videos for “Rock To The Rhythm” and “Stand Strong” as some of the most memorable. Reflecting back on that experience, The Arcitype lamented â€œRuste was one of the first people that heard something in me as a producer and gave me a shot. One song turned into a full album at our first session. Iâ€™ve put a whole lot of music out since then, but this was one of those moments where I can say someone took a chance on me, and I wonâ€™t ever forget it. Much love to all the fans this project earned me. I appreciate all the support youâ€™ve shown me over the years.â€

Now in celebration of the beginning, The Arcitype releases a brand new song, â€œBang Bang,â€ with Ruste Juxx and Reks.Â  Raw and unapologetic, “Bang Bang” features a melodic Reks hook, fire spiting Juxx verses and signature Arc knock!Â Â Five years laterÂ the duo is still making noise and reminding everyone how the phony are dealt with…