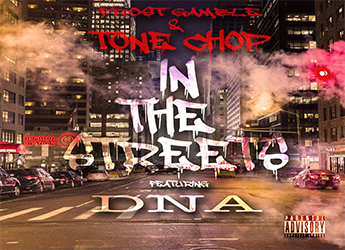 Tone Chop and Frost Gamble connect with DNA for this new single, ‘In The Streets’.

Tone Chop and Frost Gamble drop off their new single, ‘In the Streets‘. This is the third release from their album ‘Respect Is Earned Not Given‘ due out on September 29th through 22 Entertainment. This single follows ‘Walk the Walk’ featuring Kool G Rap and ‘Guillotine Chop’ featuring Planet Asia and White Rhino.

The most viewed English language rap battler DNA gets in on the action here. The Queens and Binghamton veterans trading verses which recall and compareÂ throw downs past and present,Â the arenas having moved from street corners to live streams.