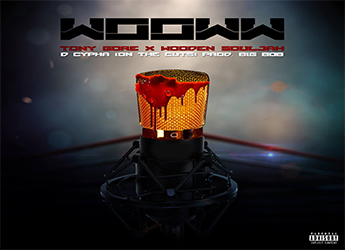 Tony Gore is back with the new BigBob produced ‘Wooww’.

Tony Gore calls to our attention the underground to discover where the true art of Hip-Hop lives. The second track off of his highly anticipated up-and-coming debut album, ‘Woow‘, evokes the true essence of Hip Hop with sampling from James Brown, classic beefy cuts provided by Dcypha from Australia.

Imaginative, flowing, ingenious lyrics from Tony Gore and Wooden Souljah of Pottersfield weave their expressive stories held together with raw, original beats inspired by the golden era of hip hop in the 90â€™s from ground breaking producer, Bigbob.Â  The core of ‘Woow’ is a salute to the sound that inspired, Tony Goreâ€™s passion for hip-hop, and a reinvigorating anthem to his focused course in the game.