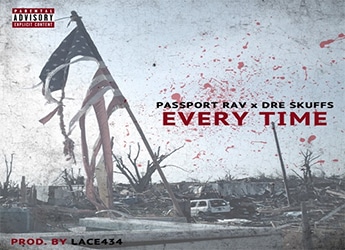 Passport Rav and Dre Skuffs mean every word on ‘Every Time’.

Passport Rav and Dre Skuffs recently went on an indie tour to London.Â  Both artists are from Jersey, with a Jamaican background and when they visit the island the term “you come from foreign” is a typical response in conversation.Â  While getting their passport stamps on the road, performing at multiple venues and hitting up Fubar Radio for a cypher that jumpstarted their forthcoming collaborative EP The Foreigners; which will be released imminently and you can surely expect them back on the road again soon.

Today, they release a new single entitled, ‘Every Time‘ which speaks on the social injustices of American society today. The haunting instrumental is provided by Virginia producer Lace434.Â  Rav mentions “performing blck evil in London, saw the faces of people that understood, but can’t relate the way that we doâ€¦” Â Dre Skuffs also gives his take, discussing the blatant agenda against black people and how social media is also spreading these truths.