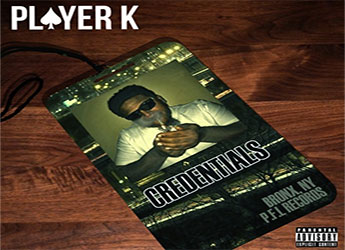 In an ongoing battle with the South, New Yorkâ€™s perseverance and never-ending pool of talent has been leading the birthplace of Hip Hopâ€™s resurgence. South Bronx upstart, Player K, letâ€™s us know who he is and why heâ€™s a new force to be reckoned with on his introductory single. The former high school football star picked up a pen and microphone as his budding sports career earned him a college scholarship to play for Buffalo State.

Despite the hardships of being put into the foster care system as a child – which had him moving back-and-forth between New York and Georgia – Player K, stayed resilient. And itâ€™s evident in the confidence he radiates in his music and in his relentless work ethic.Â To jumpstart the closing quarter of 2017, Player K, fuses NYCâ€™s grit with smooths samples from Mac Millerâ€™s â€œGood Eveningâ€ on ‘Credentials‘ featuring Dukes. As you know, itâ€™s all about credentials in the industry, and Player K is slowly building his up.