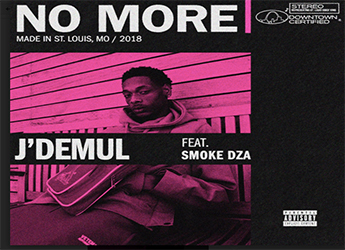 J’DEMUL debuts on SpitFireHipHop with the 92 produced ‘No More’ featuring Smoke DZA.

St. Louis, MO. and Harlem, NYC collide on the latest release from up and comer, Jâ€™DEMUL titled, â€˜No Moreâ€™ featuring Smoke DZA.Â On the new record produced by 92, Jâ€™DEMUL reflects on maneuvering life in the streets while coming to terms with his desire for mainstream success. Joined by Smoke DZA, who brings his signature, raw feel to the record, listeners are guided through meditations of corporate ambitions and dodging the law.