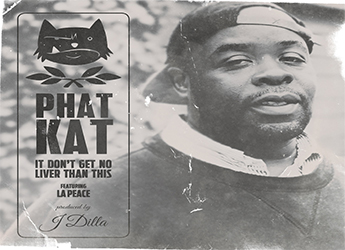 Phat Kat connects with La Peace for ‘It Don’t Get No Liver Than This’ produced by J Dilla.

Phat Kat says: “We decided to re-release the “Carte Blanche” album because it was put out right before the internet blew up, so it never really got to a lot of listeners. And it was a really good project that slipped through the cracks. It came together during the time me and Dilla were signed to Payday Records, but when the label folded we never got a chance to record a full album. We recorded “It Don’t Get No Liver Than This” for the 1st Down album but the label folded and it didnâ€™t come out.”

Originally released in 2007, Phat Kat’s 2nd studio album “Carte Blanche” is getting a re-release on July 27th via Below System Records. The deluxe edition will includes 2 new bonus tracks both produced by J Dilla.

“Carte Blanche” includes production by J Dilla, Black Milk, Young RJ, Nick Speed and features by Elzhi, Black Milk, Guilty Simpson, T3 and more. The 2 Dilla produced bonus tracks “World Premier” and “It Don’t Get No Liver Than This” with a featuring by La Peace, were recorded in 1996 and 1997.