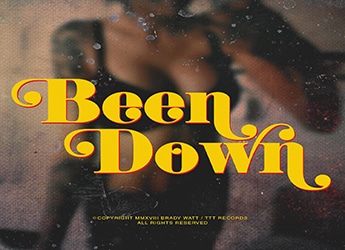 Brady Watt is back with ‘Been Down’ featuring Dru Oliver and Fat Tony.

The arrow for Brady Wattâ€™s 2018 is already pointing up. After joining Talib Kweli and BJ The Chicago Kid for a performance of Kweliâ€™s “The One I Love” on the Stephen Colbert show in support of his Radio Silence album and recently headlining gigs at the legendary Blue Note in NYC and performing at LAâ€™s famed Low End Theory club (which has been a launch pad for artists such as Daddy Kev, Flying Lotus and many others), Brady was also featured on PRhyme 2â€™s (DJ Premier & Royce 5â€™9â€™s) new project (appearing on the albums closing track â€œGotta Love Itâ€ which also featured Cee-Lo) which recently reached #1 on the iTunes Hip-Hop Chart.

With Brady handling all of the instrumentation (and background vocals), Dru Oliver (known for his work with SZA, Kehlani & Fetty Wap) and Fat Tony (from Houstonâ€™s Third Ward, Tony has released four albums and appeared on A$AP Rockyâ€™s â€œGet Lit,â€ Das Racistâ€™s â€œLuv It Mayneâ€ & Heemâ€™s â€œBanglesâ€) go from being loyal day oneâ€™s to growing increasingly wary of deciphering codes (â€œpeep how I speak, thereâ€™s no grayâ€), being finessed and unreciprocated energy.

‘Been Down‘ is just that; being down (no matter what)! But, you can be loyal to someone for a long time and find out the real truth is that they are bringing you downâ€ Brady professed. â€œSometimes you have to move on; even though it hurts incredibly bad. I was getting over a situation like this when we recorded this track.â€