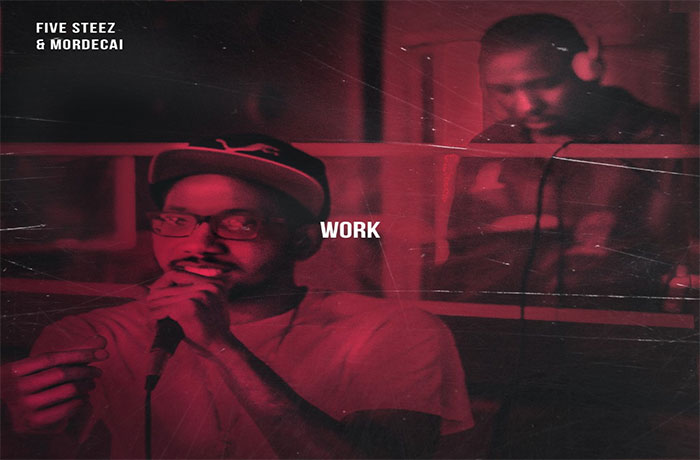 Five Steez and Mordecai lay down this new single to let you know they ‘Work’.

Kingston, Jamaicaâ€™s emcee-producer duo Five Steez and Mordecai are putting all doubters to shame with a new single titled Work, the second offering from their upcoming album, Love N Art.

Over hypnotic piano keys and a military style drum pattern cooked up by Mordecai, Five Steez addresses contemporaries and critics seeking to discredit him. He goes on expressing his belief in self and love for music, then returns to his verbal onslaught against his detractors who remain nameless.

The songâ€™s chorus takes on the form of a chant: â€œI work, what about you? / You complain all day, not a damn thing you do / We could never par, you not in my crew / You talk too much so I know you not true.â€

Mordecai, who is behind all the music on the upcoming album, says, â€œThis is one of the anthems on the project, and although it is more about Steezâ€™ journey, this song will motivate anyone thatâ€™s putting in their work in whatever field.â€

Work follows True Original, released in September as the first single from Love N Art, which is scheduled for early 2019. The album is the second body of work from Five Steez and Mordecai since the 2016 EP, HeatRockz. Steez calls it his most honest and personal project. â€œIt is also soulful and full of jazz,â€ he says. â€œWe zoned in on a specific vibe we knew people would relate to and be moved by.â€