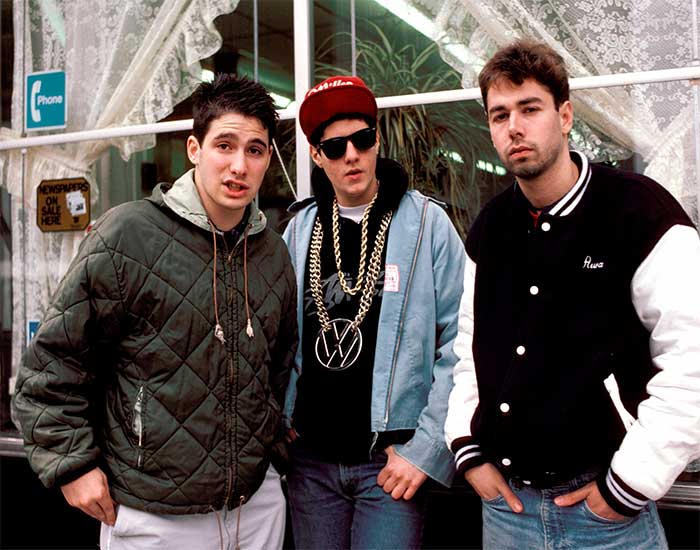 On Nov. 15, 1986, the Beastie Boys released their debut album, Licensed to Ill.Â Nearly four months after its release, Licensed to Ill knocked Bon Joviâ€™s Slippery When Wet from the top of the Billboard album chart to become the first rap album to ever hit #1. And it stayed on top for seven weeks.

Prior to the Beastiesâ€™ breakthrough, hip-hop had been slowly creeping into the mainstream consciousness from its inner-city roots. Seminal hip-hop records like the Sugarhill Gangâ€™s â€œRapperâ€™s Delight,â€ Grandmaster Flash & The Furious Fiveâ€™s â€œThe Message,â€ and Run-D.M.C.â€™s â€œItâ€™s Like Thatâ€ were all hits, but stalled onÂ the mainstream pop chart, as did the albums that birthedÂ them.

What many do not know isÂ the Beastie Boys actually began as a punk band, inspired by hardcore groups such as Black Flag. Formed from the remains of the Young Aborigines, the Beastiesâ€™ first lineup included Mike Diamond on vocals, Adam Yauch on bass, drummer Kate Shellenbach (who would go on to become a member of Luscious Jackson), and guitarist John Berry. They released the Polly Wog Stew EP in 1982; Berry departed soon after and was replaced by Adam Horovitz, and Shellenbach also departedÂ as the group evolved into a hip-hop act.

Eventually the Beasties traded in their instruments for mics and a turntable, as Yauch, Diamond, and Horovitz became known as MCA, Mike D, and King Ad-Rock, respectively. The Beasties acknowledged that hip-hop and punk shared certain sensibilities.

Released independently in 1983, the Beastiesâ€™ 12-inch â€œCookie Pussâ€ was basically a forerunner to the Jerky Boys, but this crank phone call to a Carvel Ice Cream store featured a backing of hip-hop beats and scratching. The flipside, â€œBeastie Revolution,â€ had the Boys jokingly posing as Jamaican toasters, hinting at the genre-jumping that was to come.

With their transformation into a hip-hop group complete, the trio needed a DJ for its live gigs. They chose Rick Rubin, an NYU student and budding producer who went by the stage name of DJ Double R. Also smitten with hip-hop, Rubin formed Def Jam Recordings with fellow New York hip-hop enthusiast Russell Simmons. In 1985, the Beastie Boys released the Rubin-produced, AC/DC-sampling â€œRock Hardâ€ on Def Jam, the labelâ€™s second single. Def Jam, whose roster also included LL Cool J, had landed a distribution deal with major label Columbia Records, which would insure their releases could be found in stores across the country. However, Mike D claimed that the Beasties werenâ€™t high on Columbiaâ€™s list. â€œThey looked at us as the curse of the whole deal,â€ he said at the time.

Recorded on and off during 1985 while completing tours as a support act for Madonna and Run-D.M.C., Licensed to Ill showcased the Beastiesâ€™ rapid growth from fun-loving pranksters to a legitimate hip-hop act, although there was still plenty of clowning to be found.

But Licensed to Ill didnâ€™t immediately work its way into the popular consciousness. The first four singles released from the album â€” â€œHold It Now, Hit It,â€ â€œPaul Revere,â€ â€œThe New Style,â€ and â€œBrass Monkeyâ€ â€” had only moderate success on the Black Singles and dance music charts. It was the via the albumâ€™s fifth single, â€œ(You Gotta) Fight For Your Right (to Party)â€ that the Beasties bumrushed their way into the mainstream.