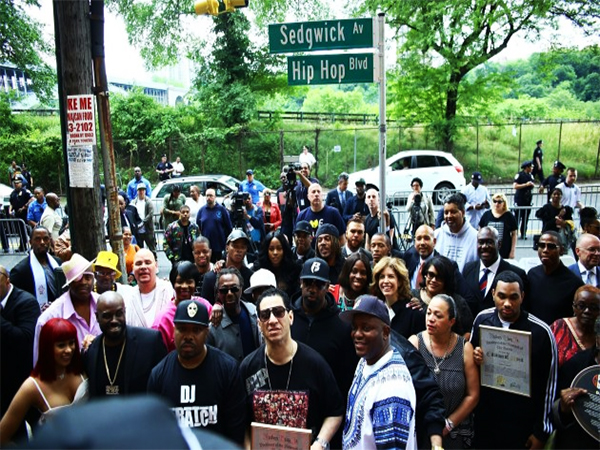 When New York City Mayorâ€™s Office of Media and Entertainment, the Office of the Bronx Borough President and Hot 97Â announced Global Hip-Hop DayÂ would be official, it felt like a dream come true for the hip-hop community. That dream turned to reality this week when Global Hip-Hop Day launched in the Boogie Down.

The co-founder of 300 Entertainment, Kevin Liles, delivered the key note address at the big day. HoT 97â€™s Ebro Darden then hosted a discussion on artist partnerships with Joey Bada$$, Ryan Leslie and Kevin Liles. The 300 Entertainment founder was also the recipient of the ICON award for his contribution to the culture, along withÂ Fat Joe,Â Slick Rick, The Lox and Ryan Leslie.

One of the most anticipated events was the Proclamation Ceremony, which renamed the address of 1520 Sedgwick Ave. (the origin of hip-hop) to Hip Hop Boulevard. Julie Menin, the Commissioner of the Mayorâ€™s Office of Media and Entertainment, Council Member Vanessa L. Gibson (Bronxâ€™s 16th District), Charlie Morgan SVP at Emmis Communications and Bronx Borough President Ruben Diaz Jr. each delivered speeches to commemorate the moment.

Ruben Diaz Jr. handed Citations of Merit to the TRAILBLAZERS, the supergroup composed of Funk Flex, Kid Kapri, Doug E. Fresh, Remy Ma and the family of deceased hip-hop producer Larry Smith. Also in attendance at Global Hip-Hop Day were Kurtis Blow, Cardi B, Roxanne Shante, Papoose and more. Then in expected fashion, the day turned into a block party at Cedar Playground. It was filled with games, raffles, food and live DJ sets by Hot 97 DJs. The last item on the itinerary was an invite-only dinner at Dirty French and was produced by Apple Music and CIROC.