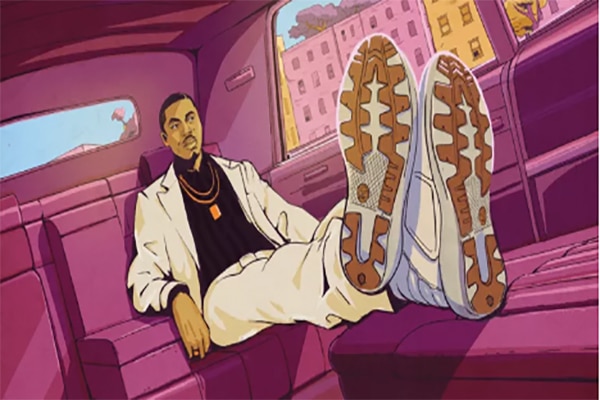 Nas has teamed up withÂ TimberlandÂ to unveil the first segment of a four-part animated feature for the Timberland â€œLegendsâ€ Collection that releases this season. Considered by many to be one of the greatest MCs of all time, Nas opens up about his early days in Queensbridge, reading his favorite superheroes, Superman and Batman, and how they played a major part in cultivating his imagination. He even recounts the story of shopping for Timbs and putting them on lay-away on Steinway Street back in the day. The Fall 2017 â€œLegendsâ€ collection also introduces its first sneaker drop in the series, the Volume VII FlyRoam Leather Sneakerboot in a buttermilk colorway that boasts a sporty silhouette in a nubuck leather.

Timberlandâ€™s Legends Collection will continue to focus on an artistâ€™s legendary journey in animated videos throughout the fall/winter season. Accompanying the illustrated films are the likes of the Volume VIII, a 6-inch Premium Strap Boot with an asymmetrical strap and sleek blackout leather, in October for $160 USD; the Volume IX, a 6-inch Field Boot with a velvet collar, in November for $175 USD; and finally the Volume X, the 6-inch Premium Boot in a mauve shadow colorway with contrasting port collar, in December for $190.

Check out how Nas correlates Timberlandâ€™s versatility in the video above and head over toÂ FootLocker.comÂ to pick up the FlyRoam Leather Sneakerboot for $150.