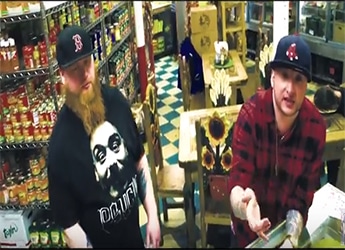 Van Buren Boyz debut on SpitFireHipHop with their new ‘Death By Burrito’ video.

The Van Buren Boyz were formed in 2016, whose members Meta P and Lord Willin’ both hail from Providence, Rhode Island. The Group, who’s name was borrowed from a Seinfeld episode in which Kramer is approached by a street gang named after the 8th president Martin Van Buren, shares common interests in Kurt Vonnegut Novels, obscure street gang references, heavy drinking, Steven Seagal movies and the martial arts.

Death By Burrito features a heavy boom bap beat, hard lyrics and a universal subject matter for fans of Mexican fare across the globe. Produced by Kev Diggs (MC Anime) and shot and edited by Redeye Movies (Team Flawless RI) it is the optimal balance of hardcore and dark humor. This is the first single off of their self-titled EP