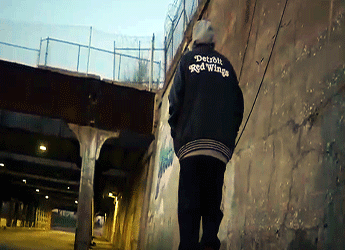 Info56 debuts on SpitFireHipHop with his ‘Southwest’ video.

Detroit artist, by way of Houston, Info56 has always had a deep connection to music. It wasnâ€™t until he late teenage years that he learned to cultivate his love for music, and find his calling as a producer and MC. Building a following throughout the years, and perfecting his craft, Info56 continues to make strides with his music. Just in time for Summer, Info56 unveils visuals for his instrumental, â€œSouthwestâ€ – a cut off his latest beat tape, of the same title.

In the video, images of the iconic and abandoned, Michigan Central Train Station, at sunrise flash in the opening scenes as Info along Vernor Highway – essentially turning his back on this cliched version of Detroit – to enter into the vibrant Chicano neighborhood of Southwest. Ascending into the morning, the sun shines on the everyday people fighting off the next wave of gentrification.

Director and Southwest native Arturo Riveras makes sure that location matters across these moving images, particularly with shots of Clark Park and the crimson and canary mosaic backdrop of its small pavilion.