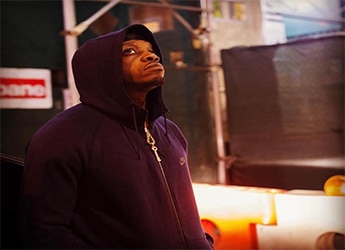 Recently finishing a 7-year sentence, Flatbush native King Mean has returned to the streets of the Big Apple with a renewed focus on life. Hitting the studio quickly,Â King MeanÂ has taking his rhyme book which carried him through his darkest nights in prison and has turned his penmanship into a considerable amount of quality records.

The kick-starter is his street anthem,Â Made Me, an ode to those who doubted and even lied about the role they have played in his redemption.Â  A product of the gritty streets of Flatbush, King Mean is no stranger to struggle and possesses a fortitude which he has directly applied to his hustle in music.Â  After making the NY Daily News under the headlines,Â â€œBrooklyn Stickup Punks Boxed Inâ€Â he looks to publicize in a much more positive and progressive manner as he has plans to take Hip Hop by storm.

Working tirelessly on his albumÂ titled â€œSacrifices,â€Â King Mean has been making his roundsÂ allowing his presence and art to be felt by the masses.