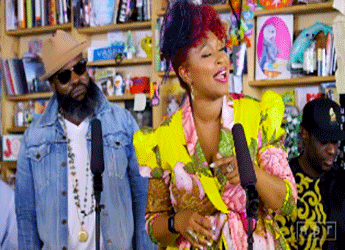 Since receiving a Grammy nomination for her vocal contributions to The Roots hit â€œDonâ€™t Feel Right,â€ the Baltimore born and DC raised singer, emcee, songwriter, activist, musical healer and cultural philanthropist Maimouna Youssef (AKA Mumu Fresh) has been making huge waves as both a solo and accompanying artist across a diverse spectrum of mediums.

Outside of her well developed relationship with The Roots (Mumu has traveled worldwide with the group; and also just finished a tour with Common), Mumu lent her vocals to DJ Jazzy Jeffâ€™s group project Chasing Goosebumps and she also received a co-writing credit on Commonâ€™s â€œThe Day Women Took Overâ€ from his Black America Again LP. Most recently she released a full length project, Vintage Babies, (2017) with producer DJ Dummy; who also serves as musical director for J. Cole and accompanies Mumuâ€™s Tiny Desk performance as well. Vintage Babies featured appearances from Common, TDEâ€™s SIR & Malik Yusef. Later this year, Mumu will release a new project with Grammy Award Winning producer 9th Wonder & The Soul Council entitled, Been Here Before, which will feature Rapsody & Musiq SoulChild among others.

Mumu has also branched out into film and television, lending an unforgettable performance on Dave Chappelleâ€™s hip-hop documentary Block Party, making a cameo appearance in the 2017 hit movie Girls Trip and contributed soundtrack work to OWN Networkâ€™s Queen Sugar, â€œContradictionâ€™s Maze,â€where she collaborated with Oddisee. Further, Mumuâ€™s â€œRoll On Sistaâ€ has also been featured on a national advertising campaign from Ford Motor Company.

No stranger to the â€œTiny Deskâ€ stage, as she joined August Greene (Common, Karriem Riggins & Robert Glasper) in late February of this year for a performance that went viral, she kicks off her set with â€œInk Pata,â€ this ode to powerful women and cultural ancestry pays homage to Native Americans spiritual rituals of old and spoke in the Lakota language and then transitions sublimely into â€œMiracle.â€ Say My Nameâ€ is a tribute to Sandra Bland and many other women whose voices dare to be heard and whose stories haunt us all until we remember their names. The performance concludes by coming full circle, as Black Thought and Mumu premiere a new and still untitled track that was specifically written for Tiny Desk. â€œIt was a blessing getting to rock with someone near and dear to meâ€ Thought commented.

“Iâ€™ve been a fan of the powerful work NPR has been doing for years and the Tiny Desk concert series has always secretly been on my bucket listâ€ Mumu exclaimed. â€œI actually wrote it on my vision board this past New Year’s Eve while I was making my new year’s resolutions, so this is a beautiful manifestation come true to be able to rock on the Tiny Desk stage with my partner DJ Dummy; not once but twice this year! The icing on the cake, Black Thought is my special guest. Of all the people in the world, Black Thought, who happens to be one of the greatest lyricists on the planet and the first MC I had the honor of touring and becoming Grammy nominated with, happily agreed to be my special guest. The spirit was high in the room, the impact was felt and history was undeniably made. Itâ€™s a blessing that I’m forever grateful for.â€

Thereâ€™s so much on the horizon for Mumu Fresh and this unforgettable NPR Tiny Desk concert is just a chapter in her great adventure.